You walk through the dust and heat of day, beyond the heart of the city, and from the haze before you emerges a shape that is both plant and place, flower and temple, both open and contained. No fence keeps you out, but one hundred and eight lanterns mark out the space, like a fairy ring in the forest, like the hundred and eight beads of the Buddhist rosary.

Through the archway you walk. Up the long, low steps, the muffled sound of your tread meets the familiar clunk of wood; the music of a seaside pier rises from the dust, invoking the sense of some long lost place where water once stretched out to kiss the horizon. Below, the improbable sounds of water and the briefest hints of ocean blue tickle the imagination. From above, eight dragons of fire and steel peer down, watching you, or look out into the distance, waiting.

And again, the thing that is neither quite plant nor place seems to hover at the edge of defining, the green rooftop like a lily pad, the great lotus rising up out of the dried mud and the memory of water, each petal big enough to sleep in, open out from this improbable tree, this pillar of memories.

Inside, past and present blend and dance together. Old rites and new technologies bring fresh form to venerable, ancient practices. There is hidden circuitry here: casting the moon blocks reveals the will of the gods in a panoply of color and light. The breath of dragons explodes outward in answer to prayer. The goddess herself has been known to appear, if the moment is right.

You leave the temple, clutching message and map, and the sound of music finds your ears. Drums, gongs and shouting voices emerge from fantastical shapes, finned and spiny, nautilus-headed dancers and demons with a thousand eyes walk out of the dust, beckoning you to join them. You wonder, for a moment, if you are in fact in a desert, or in the memories of an ancient ocean, seeing the dreams of the sea floor 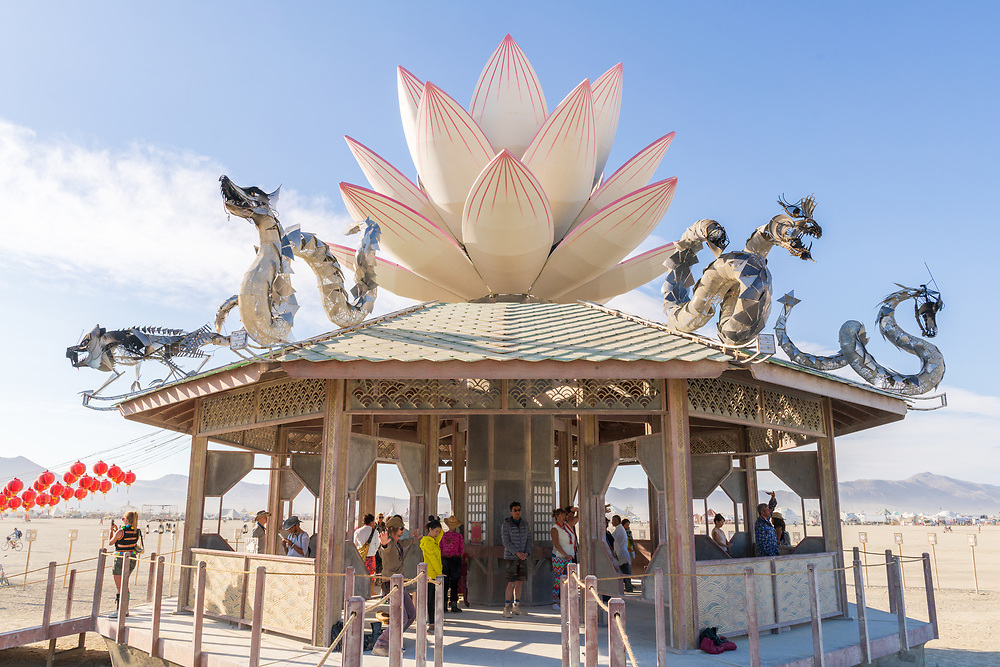